How did the skiing go?

How did the skiing go?

I know a few people have been off to the snowy alps has anyone broken anything?
I came back safely although I did try

I was having a little trip off the piste and there wasn't as much snow as I thought there was! One ski caught a rock and I was off down the mountain on one ski, not a good combination. Yes I did end up in a big heap

have to say it was the biggest stack Ive ever had

Erm skiing off piste is not wise unless your with a guide and you have the right kit IE;

As the avalanche risk is very high at the mo.
Your lucky that you didn't end up having MR/ The Ski Patrol being called out to ferry you down the mountain!!!

As your insurance would not pay out for that,think the bill for something like that was quoted in The Sunday Times at around £4k.!

Hmm.......not strictly true. depends if you rely on Bog Standard Hols Insurance. I get specific Winter Sports cover and it covers everything !! Belive me I have used it:

All in the name of snowboarding !!

The first dislocated shoulder was up the Dome on the Sunday. We went to Chamonix the following friday. Went anyhow !! Dislocated it off piste at Grand Montets. Had to be helicoptered off the mountain to Chamonix hostpital. Total bill £2300. Insurance paid for everything, no quible.

You just hear these horror stories, mainly to scare people out of going OP.

If theres more than 1ft of Powder, I gaurantee you will not have as much fun / addrenalin rush in your life. Flying down a piste doing 30mph + knowing that there could be a rock anywhere !! Unreal.

When we go we litterally spend the entire week looking for powder OP. If we don't find any, we try and get a heliboarding trip. Cham is awesome for it, seeing as its illegal in France, the Italians don't goive a hoot, so you can get a guide and two drops for about £100....its amazing !!

We managed to find a speed trap in Austria last year, and clocked 68kph on my board.........was a little scared.

Saying all that I do wear chest / shoulder pads and a helmet. Don't bother with wrist guards they just transfer the force up to your shoulders and pop the shoulders out instead of breaking wrists........shoulders heal quicker !!

But we always carry radios / shovels. Def carrying a transeiver for the Valle Balnche we are doing over Easter. Its basically one of the longest runs in Europe (17km weather permitting) from the top of the Aguil De midi (highest point in western Europe) to the Cham valley floor. 4 people on average die a year which is a little scary ! But I think they are the stupid ones who do it without a guide !! Worth the £40 each in my opinion !

The worst bit is walking from the top along the ridge to where you can start to ski. The tiny line you can see are the people walking !! On one side its a certical drop 2700m to the floor!

All in the name of snowboarding !!

Don't say things like this - I've got a snowboarding lesson in just over a weeks time at the Xscape! 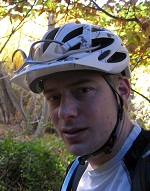 Ah don't worry it will be cool. But learning is the painful bit!

You got everything you need, trousers, jackets, helmet etc etc?

Well... had the lesson! Excellent

Felt much more natural than skiing, didn't feel like I was going to rip my legs off if I made a mistake.

Kept falling over, but hey! Who doesn't.

Going back for another 3hr lesson at the beginning of March.

Andy
XTR and a pair of Crossmax SLR's

Thats what most people who can't snowboard call them !